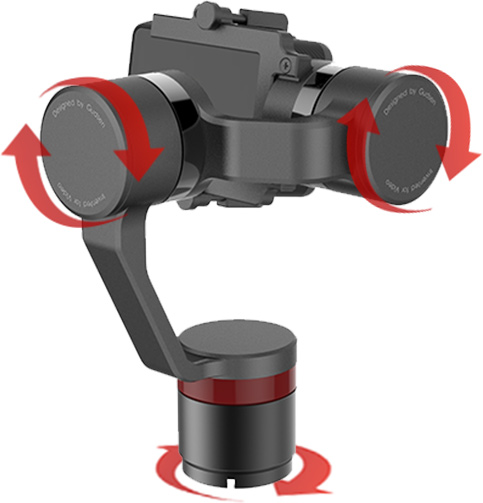 With our slip-ring technology in each motor, the gimbal is able to rotate 360 degrees on the yaw, tilt, and roll axes with no limits, allowing you to capture 360 degree panoramic videos from an immersive wide-angle perspective. Unleash the potential of your GoPro and explore the world around you with the Mini-G.

WEARABLE. To Wherever You Go

The Mini-G is a portable, professional, handheld, and wearable gimbal that's designed to capture action anywhere, at any time. With a detachable handgrip and wearable kit, it takes versatility to a new level. You can mount it on a bicycle or on-vehicle holder for spectacular extreme sports shots, or wear it on a helmet or anything else for an amazing perspective. The universal connection allows for unlimited possibilities! INTUITIVE CONTROL via the handgrip

The detachable handgrip is more than just a handlebar. In wearable mode, it serves as a remote controller for a second operator and has a range of up to 10 meters. Featuring a 5-direction joystick, it makes control of the gimbal movements in yaw, tilt, and roll axes easier and more intuitive. With the press of a button, you can change the gimbal orientation, switch to follow mode, or choose among a variety of shooting modes.

The Mini-G adopts modular construction and tool-free design that allows the gimbal to detach from the handgrip and attach to the wearable kit quickly with the twist of the adapter ring. The creative quick release system gives you the flexibility to easily transform from handheld to wearable mode.

The Mini-G has three handheld and three follow modes. Switch freely among these operation modes to capture stunning videos in any shooting scenario, at any level of complexity. Even better, selfie and time-lapse modes offer a more convenient video production! The MOZA Assistant app is all you need to connect, adjust, and control your video production. The built-in Bluetooth module in the gimbal offers wireless connection via your phone or tablet. The multi-functional software features calibration, tuning settings, wireless control of the gimbal movement, options for operation modes, and switching between shooting modes. It also enables you to time-lapse and panoramic videos for advanced customization.

The Mini-G has three handheld and three follow modes. Switch freely among these operation modes to capture stunning videos in any shooting scenario, at any level of complexity. Even better, selfie and time-lapse modes offer a more convenient video production!

At the base of the handgrip is a 1/4"thread mount that makes the Mini-G perfect for use with tripods, sliders, cranes, or anything else with a universal connection, allowing for professional video production.